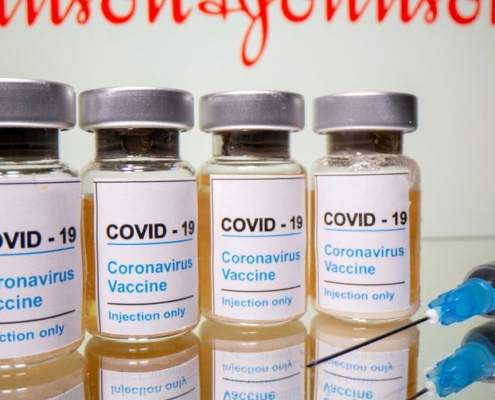 An experimental oral drug being developed by Redhill Biopharma Inc (RDHy.F) interrupts a process that helps the coronavirus infect cells and might keep COVID-19 patients from becoming seriously ill, the company said. The virus co-opts proteins in the human body called serine proteases and uses them to prepare its spike to break into cells and infect them. The drug, RHB-107, blocks the proteins’ activity. The new findings come from a small trial to confirm the safety of the drug in recently infected, symptomatic but non-hospitalized COVID-19 patients. While a larger study is needed to demonstrate efficacy, Redhill in a statement said among the 61 adults in the trial, no one taking once-daily RHB-107 (upamostat) needed to be hospitalized, compared to 15% of those in a placebo group. Rates of new-onset severe symptoms were 2.4% with RHB-107 and 20% with the placebo. Because RHB-107 acts against human proteins that are involved in preparing the virus spike for cell entry, rather than acting against the spike itself, the researchers said they expect it could be effective against new variants despite mutations in the spike.

A larger randomized trial is underway but results are not yet available. Pfizer’s Paxlovid pill, which has emergency use authorization for patients with early COVID-19, is also a protease inhibitor.

The risk of hospitalization after vaccination with Johnson & Johnson’s (JNJ.N) COVID-19 vaccine was about five times higher than for those who received the Pfizer (PFE.N) and BioNTech shot, a large French study found.

The study included nearly 7 million recipients of the two-dose mRNA vaccine from Pfizer/BioNTech and an equal number of similar people who received the one-shot vector-based vaccine from J&J. The average age was about 66, and about half were women. By the time half the participants had been fully vaccinated for at least six weeks, there had been 129 hospitalizations among J&J vaccine recipients versus 23 among the Pfizer/BioNTech group, the researchers reported on Wednesday in JAMA Network Open.

Based on their data, they estimated the effectiveness of the vaccines at preventing hospitalization at 92% for Pfizer’s shots versus 59% for the J&J vaccine. “These results strengthen the evidence” in favor of giving an mRNA booster shot to people who initially received the J&J vaccine, the authors conclude.

The SARS-CoV-2 virus in lung cells coats itself in sugars produced by the infected person’s body, which help hide parts of the virus that antibodies could target. A vaccine being tested by researchers aims to foil that trick by showing the immune system those virus parts with the sugars stripped away.

By using enzymes in a modified production process, researchers obtained a coronavirus spike protein without the sugar shields, said Chi-Huey Wong of The Scripps Research Institute in La Jolla, California. Unlike current vaccines, a vaccine that shows the entire uncoated spike to the body would likely be more effective, stimulating broader responses against variants, because the sugars disguise the parts of the spike that the variants all have in common, the researchers said. In mice, the experimental vaccine that presented the immune system with an uncoated spike “elicited stronger immune responses and better protection against variants of concern” compared to vaccines that target the original spike, according to a report published on Tuesday in Science Translational Medicine.

Removing the glycan shields to better expose the unmutated parts of the spike “has the potential to be an effective and simple approach for developing a broadly protective SARS-CoV-2 vaccine,” the researchers conclude.