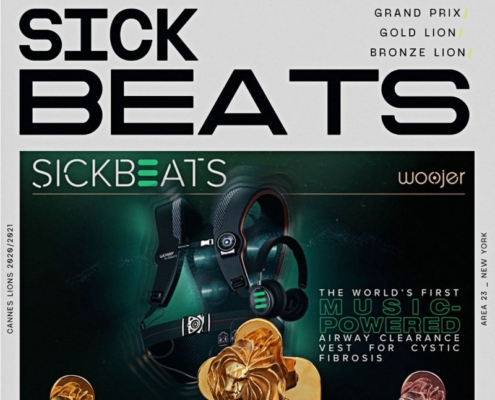 For 30,000 people in the U.S. living with cystic fibrosis (CF) —a chronic, life-long, and life-shortening disease, involving the buildup of heavy mucus within the lungs – a primary goal of treatment is to keep the airways clear to avoid serious infection. For kids with CF, airway clearance therapy is the worst part of their day. The current approach to airway clearance is bulky vests that pound the chest until the mucus is loosened and coughed out.

Since 2018, Area 23 has been developing an idea to transform this experience and joined forces with Claire’s Place Foundation, a non-profit organization providing support to children and families affected by CF, numerous pulmonologists, and consumer tech company Woojer, to develop a new approach to treatment. 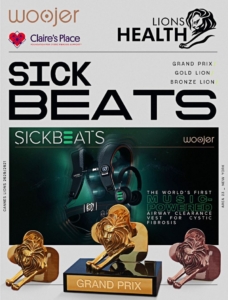 “This recognition from Cannes and the industry is validation that SICK BEATS is a magical idea that has the power to transform lives,” said Tim Hawkey, Chief Creative Officer at Area 23. “Winning the Gold and Bronze Lions would have been rocket fuel for this project, but winning the Pharma Grand Prix is surreal and will help get vests to the kids that need them that much faster.”

Working with Woojer – a pioneer in the field of haptic technology, Area 23 redesigned their consumer haptic vest to create SICK BEATS, the world’s first music-powered airway clearance vest for people with CF. The revolutionary vest uses the clinically proven modality of soundwave therapy to merge the music kids love with the daily treatment they need.

“We always knew that haptic technology had a very wide range of untapped applications,” said Woojer CEO Kfir Bar-Levav. “But in our wildest dreams, we never imagined that our entertainment technology could one day transform such an unpleasant medical procedure into a source of so much fun.”

The SICK BEATS vest syncs with a smartphone to pull therapeutic 40Hz frequencies from music and send them to the chest. The SICK BEATS experience uses a curated Spotify libraryof 40Hz songs. Kids can find new 40Hz music and create custom therapeutic playlists for the vest, all in the Spotify App.

“Airway clearance was always the most dreaded time of day for my daughter Claire Wineland,” said Claire’s Place Foundation Executive Director Melissa Yeager. “It is such an honor to be part of this collaboration to finally advance airway clearance therapy with the SICK BEATS vest. This project will impact the CF community in many positive ways, a very well deserved recognition.”

The vest is currently in clinical development to demonstrate effectiveness. The road ahead will involve a multicenter trial and application for FDA approval. After FDA approval, the vest is expected to be available at a significantly lower cost compared to current $10,000 vests, creating more accessibility for the CF community.

Pediatric Pulmonologist, Dr. Kate Lewinter, MD who has been studying the effects of 40Hz frequency for years, and is a Co-Medical Director for the SICK BEATS program said: “Given how challenging adherence can be, particularly in the adolescent population, a fun airways clearance regimen can make a huge difference when it comes to clinical outcomes.”

Pulmonologists who are interested in participating in future clinical trials of the vest can contact the Woojer team on SickBeatsVest.com.

About Woojer
Woojer is a pioneer in the field of haptic technology with patented knowhow that enhances the rich emotion of sound and physical sensation. The Woojer product range delivers high fidelity immersiveness that catapults music, gaming, movies and VR to unexpected levels. www.woojer.com

FDA Approves SOAANZ for Edema Treatment in Patients with Heart Failure and Renal...
Scroll to top