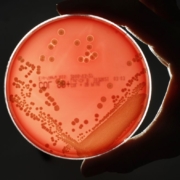 A $1 billion fund backed by over 20 drugmakers made its first set of investments on April 4 in two biotechnology startups, nearly two years after it was launched to help struggling antibiotic makers tackle the threat of antibiotic-resistant bacteria.

Swiss drugmaker Roche Holding has dropped out of a high-profile project to develop an antibiotic for treating “superbug” infections, the company said on Sunday.   Roche had agreed in 2013 to pay privately held partner Polyphor up to 500 million Swiss francs ($485.3 million) for rights to the product, marking a rare foray by a […]

A new gene that makes bacteria highly resistant to a last-resort class of antibiotics has been found in people and pigs in China – including in samples of bacteria with epidemic potential, researchers said on Wednesday. The discovery was described as “alarming” by scientists, who called for urgent restrictions on the use of polymyxins – […]

People across the world are alarmingly confused about the role of antibiotics and the right way to take them, and this ignorance is fuelling the rise of drug-resistant superbugs, the World Health Organization said on Monday. “The rise of antibiotic resistance is a global health crisis,” WHO Director-General Margaret Chan told reporters in a telebriefing […]

For the first time, tuberculosis infections rivaled HIV/AIDS as a leading cause of death from infectious diseases, the World Health Organization said in a report released on Wednesday.   It found that during 2014, 1.1 million people died of TB in 2014. During the same period, HIV/AIDS killed 1.2 million people globally, including 400,000 who […]

The U.S. Food and Drug Administration has ordered three Japanese manufacturers of duodenoscopes to conduct studies to evaluate how the devices are being used, as part of its effort to prevent the transmission of infections through the device. Duodenoscopes are flexible, lighted tubes inserted down the throat to drain fluids from blocked pancreatic and biliary […]

A non-antibiotic drug already tested in people for other uses may be active in treating Clostridium difficile, a superbug that preys on people whose protective gut bacteria have been wiped out by antibiotics. Studies in mice by researchers at Stanford University School of Medicine showed that the drug ebeselen, a compound being studied in clinical […]