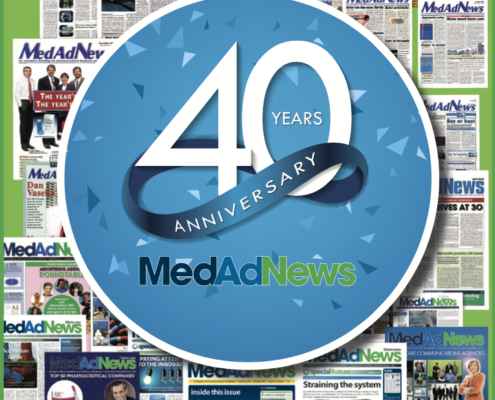 Do you remember what you were doing in 1982? That was my sophomore year in high school. I was 15 and just starting up with the school newspaper. I was out of braces, had gotten my first pair of contact lenses, and enjoying my creative writing classes. My friends and I were heading to movies such as ET, Grease, Fast Times at Ridgemont High, and The Dark Crystal. The music I was listening to was shaped by MTV, and two of my favorite songs of all time came out that year: The Go-Gos’ “Our Lips our Sealed,” and Soft Cell’s “Tainted Love.”

But 1982 marked much more than pop music and movies. That year, a young couple, Karl and Styli Engel, kicked off a newsletter aimed at a particular audience: advertising agencies serving healthcare marketers.

This was when pharmaceutical companies courted physicians only. Print was king, with ads in prestigious medical journals. Agencies that were around then included Kallir Philips Ross (KPR); Medicus; Klemtner; and Dorritie & Lyons. Agencies such as Sudler & Hennessey and Corbett were going strong. The first DTC print ad, for Merck’s pneumonia vaccine, came the year before in 1981. The first DTC spot on television for a prescription drug, for Boots’ pain reliever Rufen, came the year after, in 1983 (within 48 hours of the spot airing, FDA had issued a cease-and-desist letter; the ad agency then made a few small revisions and the commercial was allowed back on air for a time).

The Engels knew they were taking a gamble, but they saw great potential in the healthcare advertising industry at that time. Though DTC was still in its early phases, promotion to physicians was evolving, and as more drugs came out of pharma company pipelines, salesforces were getting bigger, and agencies were needed to provide not only the print ads, but the collateral for sales people to detail on. The first edition of this publication premiered during September 1982 under the name Medical Advertising News.

In 1986, Tagamet became the first prescription drug to generate $1 billion in sales. The 1990s brought a “Golden Age” of pharmaceutical promotion as sales forces reached their height and new product launches became big events for companies. By 1997, FDA and the industry had hammered out standards for DTC ads, and while most of these accounts were going to consumer agencies, some of the top-tier medical agencies were already handling them, a shift that accelerated into the 2000s. 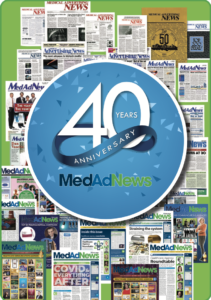 The 2000s also brought contracting sales forces, the beginning of “no see” doctors – and the disappearance of pharmaceutical tchotchkes, as the Pharmaceutical Research & Manufacturers Association in 2009 volunteered to stop distributing branded pens, sticky notes, mugs, and other objects to physicians (I still have a travel cup or two courtesy of my mother, who had worked as an officer manager and insurance biller for a family practice physician).

But the 2000s also brought the growth of the world wide web and the possibilities offered by the internet for pharmaceutical promotion – especially as social media began to take off. A decade ago, everyone was debating whether a Tweet could hold enough information for pharmaceutical promotion and include fair balance. Encouraged by creative agencies, pharma clients cautiously tried out some things, and then emboldened, tried others, and became more comfortable with this new medium.

As FDA worked out its guidances, pharmaceutical advertising agencies and their clients began to explore new channels of marketing – not just a print ad or a TV spot or a website, but programmatic content that could follow a user across all platforms.

With managed care’s influence getting even stronger, agencies that could address these specialized audiences began to grow and expand. Health and wellness evolved into its own category of promotion.

2020 and the COVID-19 pandemic rocked the world, but the pharma industry led the charge for vaccines and treatments for COVID. Technology allowed healthcare communications agencies to carry on their work for clients despite lockdowns and distance. Med Ad News – proudly working from home since 2014 – rolled with the punches, producing not just one, but two, virtual Manny Awards. (This year we are planning on the long-awaited return to Chelsea Piers.)

Like the industry it covers, Med Ad News has been through a lot. We even came back from the dead, so to speak. But we are alive and kicking, and looking forward to hopefully another 40 years of seeing the growth and evolution of pharma – and healthcare advertising.

R&D/Pipelines Report 2022: Innovating to turn the tide
Scroll to top